The Ducks left the Franki Foundations Stadium grateful for the three points but wondering how they did not score a hatful. From the first minute  the visitors peppered the Fleet goal, looking fast and dangerous, shot after shot flew at the Fleet goal, 90% of which passed harmlessy high or wide and the few on target provided Liam Beach with some catching practise, one ball even thundered off the inside of the post straight into Liam’s hands. A few breaks upfield from Fleet from Toyosi Olusanya and Bradley Wilson opened up the Ducks, but the balls in failed to find their target and when in a shooting position Fleet players looked to pass rather than shoot on sight and gave the defence too much time to clear. Liam Beach was kept busy and showed his skills to fall on one effort on the goalline, when it looked to be going in and a reflex stop when a corner was flicked on  he was able to get a leg in the way to save the goal at the expense of another corner. Fleet’s hard afternoon got more difficult when Chris Musgrove was adjudged to pull back a player running through on goal and given a straight Red Card shortly before half time. As Fleet were holding on for the break, Sonny French found himself in space towards the left edge of the area, Sonny took the ball across the pitch to the right edge of the area before he saw the space to shoot and found a way to score, as the added minute was being announced.

Fleet regrouped at the break and brought on Liam Flanighan and Dquame Copeland to start the half, then three minutes in also introduced Danilo Cadete. Liam and Danilo combined time and again down the left and played in many dangerous crosses through the half, a couple of scrambles ensued without any luck running the way of Fleet, the chances passed. Fleet were less shot shy in the second half, with Ashley Lloyd firing several efforts from around the edge of the box, most passing over the bar. The ten men of Fleet matching all the efforts of the eleven from Aylesbury, Ducks keeper Hopwood was forced to tip one effort from Toyosi over the bar but in the end could not break through to get something from the game.

The Fleet Man of the Match award was given to our keeper Liam Beach. 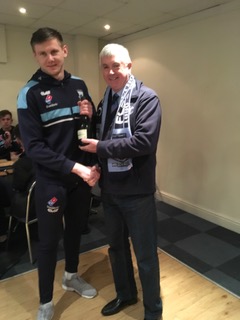