Fleet Town returned to action at the Franki Foundations Stadium for their last game before Christmas to play second in the table high flyers AFC Dunstable. The early action gave little clue to how the game would unfold, with the visitors having the lion’s share of possession and danger, but the closest they came, in those minutes was a clear header going over the bar from a corner, Fleet’s response to this escape was a fantastic run down the right from Bradley Wilson, when twice he knocked the ball past a marking defender and ran round him to collect the ball and advance, before being forced out of space on the by-line before he could get hs cross away. Then as another attack from the visitors came to nothing a long ball out from Liam Beach found George Pilbeam who seeing space between the visitors keeper Jamie Head and the goal, lobbed it up and over the keeper into the net, as Jamie knowing he was beaten could only stand and admire the shot, the goal being good enough to earn George Pilbeam the Man of the match award after the game. A few minutes later Fleet were nearly in again, when Bradley Wilson played the ball into the danger area, only to see it fall between Pilbeam and Matt Bunyan for Dunstable to clear. A quick break from the visitors saw them get the ball to dangerman Bernie Christie, from his position in the middle of the park, outside the box, he let fly and brought a fantastic save from Liam Beech, his leap saw the outstreatched arm reach the ball and tip it over for a corner. A moment of drama came on 33 minutes, when Dunstable won themselves a Penalty, taken by the normally reliable Jermaine Hall, the ball was fired wide of the left post as he saw it, with Liam diving the other way. Half Time came with Fleet still holding the narrow advantage.

The second half seemed to take a while to get going, but after an hour, Dunstable came close when a dangerous cross from the left was going closer to the goal, Liam got over to help it round the post before an advancing attacker could reach it. The corner being easily dealt with, like many crosses being close to Liam for him to catch and clear. A few minutes later and out of nothing the visitors were given another Penalty, this time the reponsibility was given to Drew Roberts, who made no mistake and brought the scores level. With Fleet breaking downfield, suddenly everyones attention was drawn to an off the ball incident with almost all the players looking to get involved with pushing and shoving. After calming the melee down, the three officials met and after what seemed an age, decided what they thought they had seen and produced Red Cards for Fleet’s Ashley Lloyd and Nathan Frater for the visitors. Being down to ten a side, it seemed to give the players a little more space in the final ten minutes, Bradley Wilson broke down the right and his cross was flicked by the head of Chris Wales, in a very advanced position, into the net to restire Fleet’s lead. But only three minutes later, the visitors were level again when some untidy possession and deflection found Terry Griffiths in place to see the ball over the line. With 6 minutes left and what turned out to be 6 minutes added time, the surprise was that was the end of the scoring, leaving Fleet to take another point, from their second consecutive 2-2 home draw. 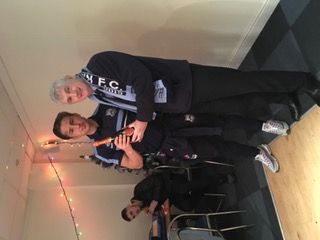 Everyone at Fleet Town wishes all our fans, supporters, readers a Happy Christmas, but not to overdo the celebrations, so you can be up early for the trip down to Portsmouth to play Moneyfields on Boxing Day as it is 12.30 lunchtime kick off.